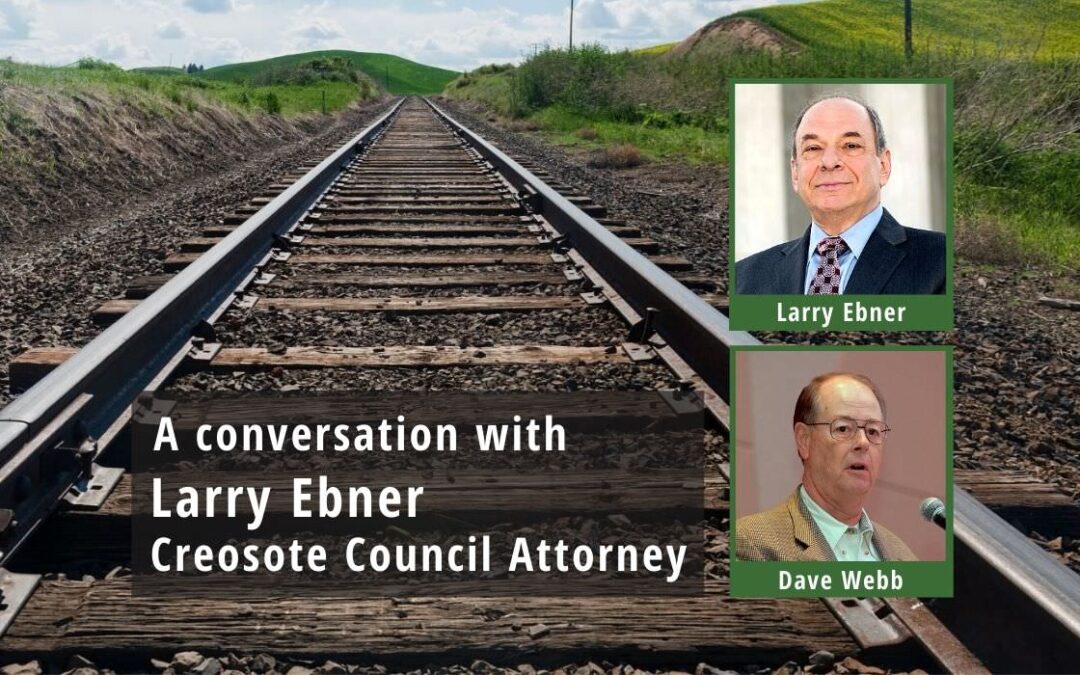 Larry Ebner has served as attorney for the Creosote Council since its inception in the mid-1980s. The Council’s Administrative Director, Dave Webb, recently asked Larry to chat about his professional background and work with the wood preserving industry.

Dave Webb:  Larry, I know that you have been a lawyer for almost half a century. Can you briefly summarize your professional background?

Larry Ebner:  After graduating Harvard Law School in 1972, my first legal position was as an Honors Program attorney in the Civil Division of the U.S. Department of Justice.  In 1974 I joined a small Washington, D.C. law firm, which through mergers and acquisitions, eventually grew into a global giant. I stayed at that firm, where I specialized in appeals involving the federal government, and in pesticide-related litigation and regulation, for more than 40 years. In 2016 I launched my own, solo-practice firm, Capital Appellate Advocacy PLLC.

Dave Webb:  How did you first become involved with the wood preserving industry?

Larry Ebner:  In the mid-1980s, the U.S. Environmental Protection Agency (EPA), which regulates pesticide registration and labeling under the Federal Insecticide, Fungicide, and Rodenticide Act (FIFRA), completed its Special Review of “heavy duty wood preservatives”—pentachlorophenol, chromated copper arsenate, and creosote. Many wood preservative registrants and users were unhappy with certain restrictions that EPA wanted to impose. Wood preserving industry trade associations engaged me as lead counsel to challenge EPA’s proposed restrictions. The formal administrative proceeding that I initiated on behalf of the industry eventually was settled on terms acceptable to the industry.

“The Creosote Council successfully navigated Reregistration (see U.S. EPA Approves Continued Registration of Creosote) and I am confident the Council will do the same with the ongoing Registration Review program.”

Dave Webb:  What about the Creosote Council?

Larry Ebner:  EPA’s Special Review was followed by a “Registration Standard” process, which later became the “Reregistration” process. FIFRA enables pesticide registrants, such as wood preservative manufacturers, to maintain their federal registrations by jointly sponsoring product chemistry, toxicology, environmental fate, and other types of studies.  The Creosote Council was formed as such a FIFRA joint data development group.

Dave Webb:  Over the years, you have provided creosote producers and users, and the broader wood preserving industry, with legal advice on many subjects. Is there one that stands out?

Larry Ebner:  The issue that immediately comes to mind is the scope of EPA’s authority under FIFRA to regulate treated wood after it leaves a pressure-treatment plant.  During the mid-1980s, we successfully challenged EPA’s Special Review proposal to require treated wood to be labeled with a “Consumer Information Sheet.” We convinced an EPA administrative judge that unlike wood preservatives, treated wood itself is not a “pesticide” subject to FIFRA regulation.

EPA responded by issuing what is known as the FIFRA Treated Articles Exemption.  Under that regulation, wood that is treated with a registered preservative to protect the wood itself is theoretically considered by EPA to be a pesticide, but is expressly exempt “from all provisions of FIFRA.”  This means, for example, that EPA cannot require treated wood to be labeled.

Although the Treated Articles Exemption was issued more than 30 years ago, there still are gray areas about where to draw the line between EPA’s authority to regulate how preservatives are applied in a pressure-treatment plant and EPA’s lack of authority to regulate treated wood after it leaves the plant.  Our article on the Scope and Application of the Treated Articles Exemption discusses this subject in detail.

As you know, the Creosote Council always has tried to interact with EPA in a constructive, cooperative manner. Sometimes that includes having me, as the Council’s attorney, providing EPA with legal input at meetings or in written form.

Dave Webb:  Are there any state-level creosote legal issues that posed a particular challenge for you?

Larry Ebner:  The New York and New Jersey legislative prohibitions against certain uses of creosote-treated wood during the mid-2000s come to mind. As our article, Piling It On For the Dockbuilders explains, these unjustified partial bans were purely political.

Dave Webb:  How does creosote’s future look from a legal viewpoint?

Dave Webb: Thank you, Larry, for your decades of service to the Creosote Council. What is the best way to reach you for further information?

Larry Ebner:  My email address is lawrence.ebner@capitalappellate.com and my office phone is 202-729-6327.